Is Pakistan’s solar power poised to take off amid energy crisis?

Is Pakistan’s solar power poised to take off amid energy crisis?

New high-quality solar maps – essential to securing financing for major solar projects – show Pakistan is one of the world’s best countries for producing solar energy because of its arid climate and latitude.

“The government is waking up to its potential,” said Masud, a director of Hagler Bailly Pakistan, an energy and environmental consulting firm in Islamabad. “With the prices of (photovoltaic panels) falling drastically in the last four years, the switchover to renewables will happen – gradually.”

Pakistan’s current national power shortfall is estimated to be more than 6,000 megawatts, causing long power outages across the country.

The country is building nearly a dozen coal power plants over the next 15 years with Chinese investment, as part of its attempts to end the crisis. 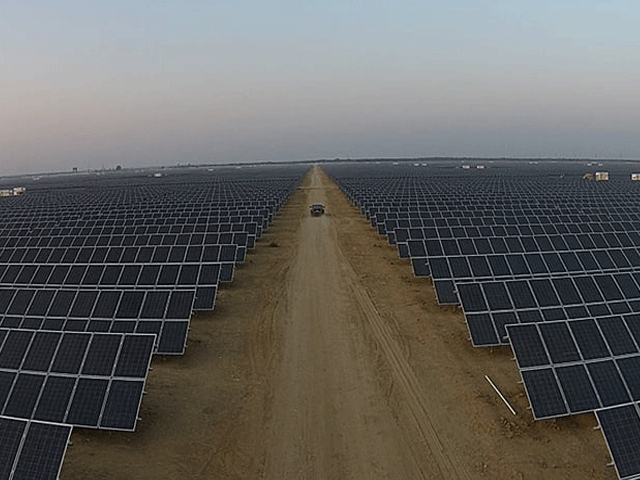 But Pakistan also has a range of major solar projects in the pipeline, amounting to more than 4,400 megawatts in potential power, said Amjad Awan, chief executive officer of the federal government’s Alternative Energy Development Board (AEDB), an autonomous body working under the Ministry of Water and Power.

Until now, the country’s lack of detailed solar maps – needed by major investors, especially US companies – has held back the development of renewable energy, said Ali Habib, managing partner of Shama Solar, a company based in Lahore.

That changed in March when Pakistan became one of the few developing countries to produce the maps. They were developed by the AEDB and World Bank, drawing on data from nine solar data stations and 12 wind masts installed across the country.

“This is credible data according to which banks can give funding to potential projects,” said Awan. “The government can now do the appropriate zoning and develop solar and wind areas.”

The solar maps highlight which regions are most suitable for solar power generation. The south-western province of Balochistan – a desert area with little cloud cover or air pollution – has the country’s largest solar potential, they show.

Germany is a world leader in producing solar energy and uses detailed solar maps to assess its own solar resources.

Pakistan’s data has been made public as part of the Global Solar Atlas website, giving commercial scale projects ready-to-use seasonal and monthly data.

This means investors do not have to spend significant time and money gathering data for their projects. Instead, “they can instantaneously acquire certified data of ‘bankable’ quality that should be acceptable to commercial financing institutions”, said Masud.

That can substantially lower the costs around projects, which in turn encourages companies to set up large-scale solar power facilities, he said.

“Solar is already taking off in Pakistan – it’s going to challenge grid-connected power,” said Fariel Salahuddin, an energy specialist based in Karachi.

“Roof-top solar panels are growing organically and as for the grid-connected solar projects, lots of pieces are coming together like regulation, tariffs, investments and grid capacity,” she added.

Pakistan’s National Electric Power Regulatory Authority (NEPRA) has issued guidelines for net metering so consumers can now sell the excess solar energy they produce back to the grid, Salahuddin said.

One of the first licenses for net metering was issued to Pakistan’s parliament building in Islamabad, which switched to solar energy last year. Some banks have started financing home solar systems, which are cropping up across the country.

The Islamabad Electric Supply Company has introduced net metering, and other power companies in large cities such as Lahore and Karachi will be following suit “in a matter of months, not years” said AEDB’s Awan.

However, the government still needs to simplify connection rules and procedures for small-scale solar power to be more widely adopted, Masud said.

“There are several procedural and commercial details to be worked out before rooftop photovoltaic panels become a common sight in Pakistan, but it’s only a matter of time before it does,” said Masud.

Pakistan already has one major solar park – the Quaid-e-Azam Solar Park in Bahawalpur, built with Chinese investment. It produces 400 megawatts with plans to rise to 1,500 megawatts of solar production.

“Not just the Chinese, but many other companies from countries like Germany and the United States are coming into Pakistan to invest in solar energy,” said Vaqar Zakaria, the chief executive officer of Haigler Bailly Pakistan.

However, despite its considerable solar and wind potential and the rapidly decreasing costs of renewable energy, Pakistan continues to focus on building its coal-powered generating capacity.

The government plans to add 10,000 megawatts of coal energy to the country’s energy mix by 2020.

“Solar and wind have their limitations. Solar can’t produce electricity at night,” said Shama Solar’s Habib. “Every country needs a base load that can run all the time – and that still comes from coal and gas or oil.”