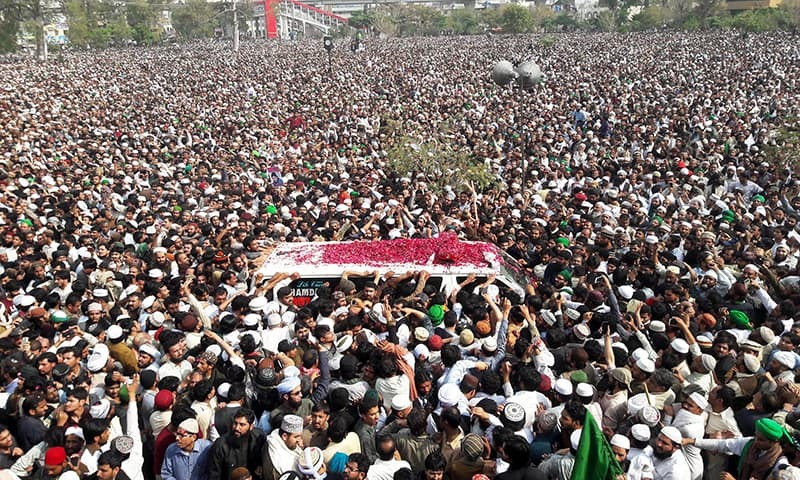 Pakistan has renewed its vow to root out extremism after a fresh wave of attacks, but a rose-covered shrine in Islamabad built by radicals to glorify a murderer sends a different message.
Followers of Mumtaz Qadri are set to fete him as a hero at his tomb, the start of a three-day festival marking the anniversary of his hanging on February 29, 2016.
Qadri assassinated liberal Punjab governor Salmaan Taseer in 2011, angered by the politician’s reformist stance on Pakistan’s controversial blasphemy laws. The state’s decision to execute him provoked an uproar among hardliners.
“There could be 400,000 people,” Qadri’s father Malik Bashir Awan told AFP this month as he supervised preparations for the commemoration from his plastic chair at the shrine.
Authorities appear unwilling to oppose it.
And while the government showed unexpected determination by executing Qadri, his family say it did not prevent them from sanctifying him with the white marble tomb, adorned with four tapered minarets and a tiled green dome.
Each day dozens visit the shrine, built on a family plot bordering Islamabad but within the capital’s territory, to seek divine intervention and leave flowers. The gestures glorifying the fundamentalist are a perverse echo of popular South Asian traditions venerating mystical, tolerant Sufi saints, many of whom helped spread Islam through the subcontinent.
Qadri’s family do not intend to stop there. His father hopes to build a madrassa on the site. Donations from supporters are already pouring in.
The shrine is a glaring demonstration of how, despite military success in fighting insurgents, Pakistan has made little progress in tackling the underlying causes of extremism.
A military-led crackdown supported by the government’s vaunted National Action Plan led to a dramatic improvement in security in the country since 2014.
Then, a wave of apparently coordinated attacks over the last fortnight killed 130 people and shredded the growing sense of optimism. Analysts say there are “visible signs” militants are regrouping.
“It’s turmoil again,” Asha’ar Rehman, the Lahore editor of leading daily told AFP this week.
For Arif Jamal, an expert on radical extremism, the presence of the shrine helps to bolster beliefs that contribute to extremism. “Even for a peaceful Pakistani, the mere existence of such a shrine convinces people that the killing of Salmaan Taseer was actually good,” he told AFP. “It is a first step in radicalisation.”
But cleric Hanif Qureshi, whose fiery speeches helped inspire Qadri’s actions, was dismissive. “One year has passed, nobody has killed anyone,” he told AFP.
Observers are divided over the government’s inaction.
It is not that Qadri’s supporters are strong, said Saiful Mulook, one of the prosecutors at his trials – “it’s the government’s will which is weak”. “It’s discouraging,” Mulook told AFP.
“Knowingly paying homage to… (a murderer who) has been judged a terrorist by the highest court in the Constitution of Pakistan – what poorer moral standard can a society show?”
However, the cost of taking action against the shrine could outweigh the dangers of allowing the memorial to flourish, said Zeeshan Salahuddin of the Center for Research and Security Studies. “If the government takes a step, goes after this shrine, there’s a very, very good chance there’s going to be anarchy in the streets,” he said.
The sanctuary’s existence also shores up supporters of the blasphemy laws, a hugely sensitive issue in Pakistan, where even unproven allegations can result in mob lynchings and murder. Critics, including the assassinated Taseer, have said the laws, which can carry the death penalty, are routinely abused to carry out personal vendettas.
Over 100 clerics arrested in Lahore for trying to ‘celebrate’ Salmaan Taseer’s assassination
Cleric Qureshi said Qadri is venerated for his defence of the Prophet Muhammad (PBUH). “There is no debate, only very few people are against Qadri,” he insisted. “All Pakistanis love him.”
There are concerns that if Qadri’s family is able to build their madrassa, they could train a new generation of religious fanatics, like at the influential and radical Red Mosque which has long operated in the heart of Islamabad.
Muhammad Noman, a 26-year-old visiting the tomb from Karachi, told AFP he was inspired by Qadri. “He sacrificed his life for our faith. May God give us opportunities like him to give our lives,” he said calmly.