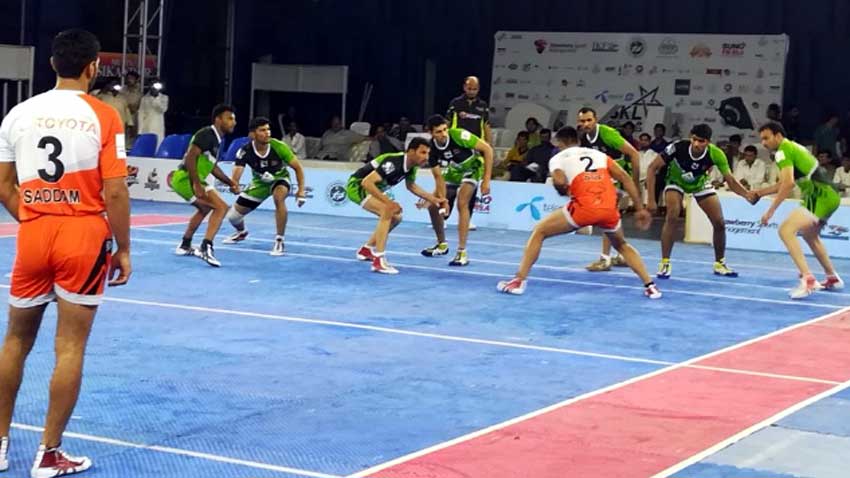 Semi Finals of 1st Pakistan Kabaddi League will be played at Nishtar Sports Complex in Lahore this evening today.

The final of the event will be played at the same venue tomorrow evening.

Earlier in Pakistan Super Kabaddi League, four quarterfinals were played in Lahore among the players from Karachi, Kashmir, Gwadar, Faisalabad, Peshawar and Sahiwal, Multan and Gujrat.

Gwadar, Karachi, Kashmir and Multan continued their winning streak in Pakistan Super Kabaddi League by notching up victories against their respective rivals on Monday at Nishtar Park Sports Complex.

Sahiwal made desperate efforts and narrowed lead against Gwadar but failed to strike a win. Gwadar seemed quite determined the dying stages of the play and won the match with two points difference.

Karachi appeared master of the situation against Lahore throughout the match with better planning and attacking game. Karachi’s aggressive approach and super attacking was the key factors behind their success.

Lahore remained in pressure in a one-sided affair in which Karachi always enjoyed all-time supremacy at the points table.

Kashmir proved too good for Peshawar and won the match with ten point’s difference. They kept their opponents under persistent pressure with a variety of attacks and always built-up lead with time-to-time changed strategy.

Multan was fwon the match against Faisalabad with three points difference. Both the team followed each other and equalized the score on occasions with greater anticipation and determination for the treat of a handful crowd.

From Pool A, Karachi and Gwadar are at number one and number two places. Lahore is at the rock bottom with four successive defeats.

Peshawar is at top in the Pool B with 6 points, with three victories to their credit and one loss from four matches.

Pakistan’s Super Kabaddi League began on 2nd of May in Lahore, and will conclude on the 10th  of this month, under the aegis of Pakistan Kabaddi Federation (PKF). The event is featuring 10 city-based teams: Peshawar Haiders, Faisalabad Sherdils, Gujrat Warriors, Gwadar Bahadars, Karachi Zorawars, Multan Sikandars, Sahiwal Bulls, Islamabad All-Stars, Lahore Thunders and Kashmir Janbaazs. The foreign players in the league are from Iran, Sri Lanka, Bangladesh, Kenya and Iraq.