May 15, 2018 Appeal of Religious Minorities to the Chief Justice of Pakistan 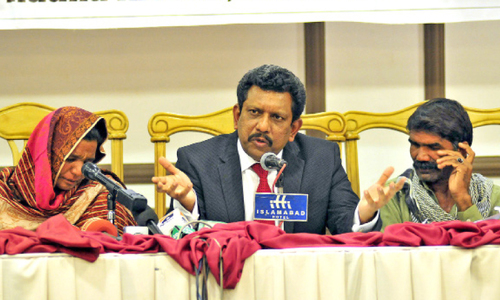 Appeal of Religious Minorities to the Chief Justice of Pakistan, Justice Mian Saqib Nisar for their Constitutional Rights

Islamabad May 15, 2018: Pakistan Interfaith League (PIL), under the auspicious of Sajid Ishaq, Chairman PIL, on Tuesday submitted an appeal to the Chief Justice of Pakistan, Justice Mian Saqib Nisar, to ensure that the Constitutional Rights of the Non-Muslim Pakistanis are safeguarded and that their rightful demands for true representation in the Parliament are fulfilled.

Pakistan Interfaith League (PIL) is a socio-political movement which believes that instead of treating people with different religious beliefs as minorities they should be given equal status as all other Pakistanis.; they should be considered an integral part of Pakistan as they are proud to be Pakistanis.

Sajid Ishaq said the Religious Minorities believe that the Population Census data of the Non-Muslim Pakistanis is being intentionally delayed in order to discourage their true representation in the Parliament. Further elaborating he said that the demand of increasing the reserved seats of the Minorities was presented twice in the National Assembly between 2008 (PPP Government) and 2013 (PML-N Government) however both the times it was struck down on the pretext that the issue would be taken up after the next census. Sajid Ishaq said that the plight of the matter is that even after the 2017 Population Census, the data of the Minority Population was deliberately held back and the living proof is that the Election Reforms Committee, which sat down in 2017 had no comprehensive data on the Minority Population, yet again denying the Constitutional Rights of increasing the reserved seats of the Minorities as per their population and resulting in unequal distribution of representation. He also highlighted the grievance that the Election Reforms Committee comprised only of members of the Majority community, with no member from the Minority community.

Sajid Ishaq also deliberated on the fact that according to the Census the population of Pakistan has increased from 92.22 million to 200,813,818 million from 1985 to 2018, which is an increase of approximately 125% over a period of 33 years, however the Reserved Seats for Non-Muslim Pakistanis are stagnant at 10 seats since Eighth Amendment 1985 in the Constitution of Pakistan 1973. He demanded that Electoral Reforms should be made and the present practice of “Selection” should be abolished and “Election” should be promulgated so that the Minority representatives are accountable to their voters instead of their Political Parties. He further pointed out that Non-Muslim constituencies should be divided Province wise, in accordance to their population in each Province.