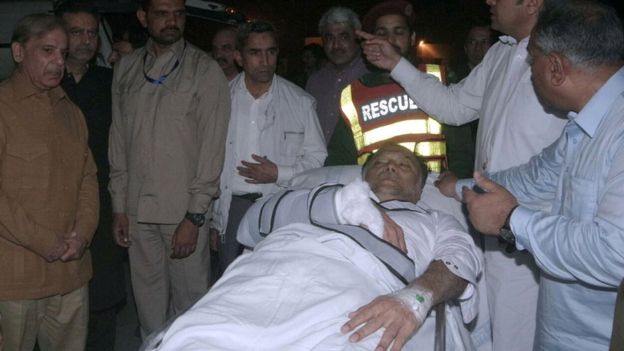 Recovery of Pakistan’s Interior Minister Ahsan Iqbal: Pakistan’s interior minister is recovering in hospital after being shot in a murder attempt possibly linked to blasphemy.

Ahsan Iqbal, was shot in the right arm as he prepared to leave a public meeting in his constituency in Punjab province late Sunday. After the shooting he was rushed first to a local hospital and then airlifted to Lahore.

A man identified by police as Abid was wrestled to the ground by police as he was preparing to fire a second shot has been taken in to custody. Police has arrested today another suspect name Azeem.

The shooter said he carried out the attack over a small amendment to the oath that election candidates must swear which was rapidly reversed last year after it was linked to blasphemy.

The controversy ignited a 3 week sit-in last November by a Tehreek Labaik Ya Rasool Allah paralyzing the capital and ended when the government capitulated to the protester’s demands including the ousting of the federal law minister in a deal brokered by the military. Ahsan Iqbal, remained, heavily involved in the negotiations at the time.

The attack on Pakistan’s Interior Minister is widely condemned by the international community, including the US ambassador and the French embassy, as Pakistanis voiced fears it represented an attempt to weaken democracy ahead of the federal elections.

National and international communites while strongly condemning the attack, called it a bad omen for upcoming general elections which is supposed to be free, fair and transparent.

With the court banning Sharif from politics for life, while foreign minister Khawaja Asif was also ousted by the Islamabad High Court late last month for violating election laws, there has been growing speculation that summer elections 2018 could be delayed.

If this killing attempt on Ahsan Iqbal had succeeded, it would not have been the first political killing linked to blasphemy. In 2011, Punjab governor Salman Taseer, a liberal who had called for reformation of the laws, was gunned down by his own bodyguard in Islamabad.

Blasphemy can be punishable by death under controversial Pakistani legislation, with even unproven allegations sparking mob lynching’s and murders.

Doctors and family of the interior minister have confirmed that Ahsan Iqbal is in stable condition now but will remain in ICU for a day or two.