May 8, 2018 UAE Donated Fund To Pakistan Under Assistance Program 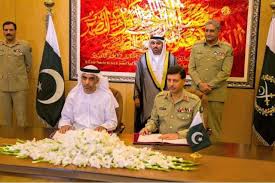 UAE Donated Fund To Pakistan Under Assistance Program: Pakistan and the UAE share the same principles of tolerance and inclusiveness as being the main guarantees for peace and stability in the region.

Who Signed The Agreement

At the end of the signing ceremony, the UAE representatives presented a memorial plaque to the Chief of Pakistan Army, marking the 51st anniversary of the drive of humanitarian aid for Pakistan initiated by late Sheikh Zayed in 1967.

During past 4 decades, the UAE has spent billions of rupees on supporting anti-polio vaccination drives in Pakistan, along with other humanitarian operations.

Al Za’abi affirmed that the launch of the third phase of the UAE’s development and humanitarian projects in Pakistan underscores the commitment of the UAE to stand constantly by the people of Pakistan, affirming that the PAP is a pioneering model and a concrete guide to success of the humanitarian development effort of the UAE leadership.

Shaikh Mohammad Bin Zayed has played a prominent role in polio eradication in Pakistan through his generous donations to provide polio vaccinations to Pakistani children in remote and hard-to-reach areas.

One more reflection of the historical and distinctive relations between the two countries is the large Pakistani community living in the UAE, who have significantly contributed to the country’s development drive and journey of success.