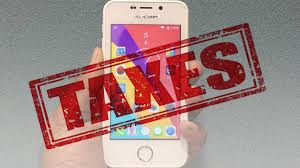 The CJP issued notices to the federal government and cellular companies, asking “under which head an amount of Rs40 is being charged on every Rs100 recharge”.

The apex court adjourned the hearing till Tuesday seeking replies from the respondents.

Earlier in the day, the Senate’s Standing Committee on Finance, Income and Financial Affairs proposed to put the ban on all kinds of night packages provided by cellular companies.

During a meeting, Senator Siraj-ul-Haq recommended that gross sales tax and sales tax imposed on cellular users should be withdrawn and a ban should be imposed on all kinds of night packages.

The committee proposed the ban on night packages which include SMS, calls and internet packages.

While the committee recommended sending the matter of night packages to Ministry of Information Technology and Pakistan Telecommunication Authority (PTA), it put off the matter related to advance tax on mobile phone recharge.

Senator Muhammad Ateeq Shiekh during the meeting said, consumers, have to pay Rs.28 on Rs.100 card which is unfair. The government should remove advance and withholding tax being charged on Rs.100 mobile card.

Pakistan Senate Standing Committee on Finance, Income and Financial Affairs on Wednesday has proposed to put the ban on all kinds of night packages provided by cellular companies.

Senator Ateeq mentioned that he’s bringing a complete proposal on the matter and it was decided to discuss the matter in detail at later date.