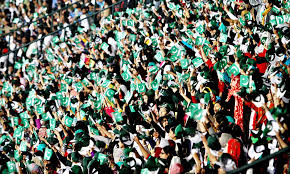 UNDP Reports On Pakistan’s Youth: According to the new National Human Development Report launched by the United Nations Development Program (UNDP) Pakistan, Pakistan currently has the largest percentage of young people ever recorded in its history.

The report says 64%of the total population is below the age of 30 while 29% is between the ages of 15 and 29 years. The country progress depends on how the country invests in the youth by providing them with quality education, employment and meaningful engagement opportunities. If engaged and utilized properly, the youth can serve as catalysts for the Sustainable Development Goals (SDGs).

It is one of the youngest countries in the world and the second youngest in the South Asian region after Afghanistan.

Only 14 out of 195 countries spend lesser than Pakistan on education and stressed on spending more on education as at the current net enrolment growth rate of 0.92%, it will take another 60 years to reach the target of zero out of school children.

Young people between the ages of 15 and 29 make up 41.6% of Pakistan’s total labor force and four million people reach the working age in the country every year.

The report says that 90% of the youth do not have access to recreational facilities, 15% have access to the internet, 8% to radio and 48% own a mobile phone.

UN Resident Coordinator Neil Buhne said that UN, in line with the government’s Vision 2025, has prioritized working with the youth as a key pillar to UN’s work across the board.

Japanese Ambassador Takashi Hurai added that if the youth are not handled properly and not provided with meaningful engagement in society, it will be a disaster for the country.

The report is authored by dean of the Pardee School of Global Studies at Boston University Dr Adil Najam and Dr Faisal Bari, associate professor of Economics at the Lahore University of Management Sciences (LUMS).