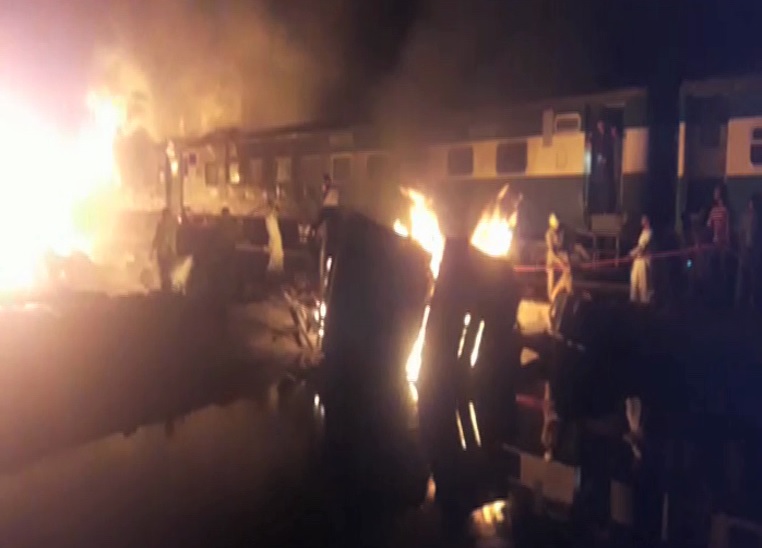 Three people were killed and at least 10 injured when Karachi-bound Shalimar Express collided with an oil tanker at a railway crossing near Hiran Minar in Sheikhupura in the early hours of Tuesday.

District Coordination Officer (DCO) Tari Akram stated that the oil tanker’s brakes failed moments before the collision, while Deputy Superintendent of Police Khalid Gujjar claimed that the accident occurred due to the railway crossing’s barrier being left opened.

Eyewitnesses, however, reported that the oil tanker’s driver parked the vehicle on the railway track and continued arguing with the gatekeeper to open the other gate of the crossing when Shalimar Express hit it.

Engine and six bogies of the train, including the luggage compartment, caught fire. Fire brigade and rescue teams were summoned to begin the relief operation, but the fire-fighting operation was discontinued for a while as the vehicles went short of water. Four fire engines took more than two hours to completely douse the fire.

The driver of the train Abdul Latif and his assistant Abdul Hameed were present in the cabin and died in the accident, while the oil tanker’s driver and railway crossing personnel were arrested immediately.

The passengers saved their lives on self-help by jumping out of the train’s windows and the injured were shifted to District Headquarters Hospital, Sheikhupura.

The railway authorities sent a rescue train to bring back the ill-fated train’s passengers to Lahore from where they will be departed for Karachi on a special train.

Federal Railway Minister Saad Rafique confirmed the death of train’s driver and also told that the accident took place as excel of the oil tanker malfunctioned.

“One engine and three bogies were damaged in the accident. We have dispatched a relief train from Lahore,” he said. “The accident happened because of the oil tanker driver’s hurriedness,” he claimed.” I will give further information on accident after the relief operation.”