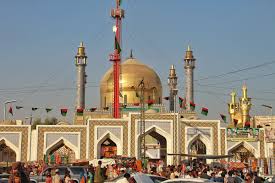 Thousands of visitors reached Sehwan Sharif to commemorate death anniversary of Sufi saint Lal Shahbaz Qalandar. The Urs of Lal Shahbaz is held on 18th of Shaaban, eighth month of the Muslim calendar.

The death anniversary would be observed over three days, from Saturday till Monday.

This is the second such event in Sehwan after deadly explosion at the shrine, which claimed nearly 100 lives and injured many others on February 16, 2017.

The shrine was closed for visitors following the incident, but activity on the premises restored after some time. Last year too the Sufi saint’s death anniversary was observed in the city.

Strict security arrangements have been made with installation of CCTV cameras and walk through gates in order to provide security to devotees during the Urs celebrations.

The tomb of Lal Shahbaz Qalandar is located in Sehwan Sharif, Sindh, Pakistan. The shrine was built in 1356 and decorated with Sindhi ‘kashi-tiles’, mirror-work and a gold-plated door donated by the Shah of Iran, Reza Shah Pahlavi.

Lal Shahbaz Qalandar, son of Pir Syed Ibrahim Kabeeruddin, was born in Marwand. His ancestors had migrated from Baghdad and settled in Mashhad, before moving again to Marwand.

Lal Shahbaz lived a celibate life and died in the year 1300 at the age of 151. In Multan, he met Bahauddin Zakariya of the Suhrwardiyya, Baba Fariduddin Ganjshakar of the Chishtiyya and Syed Jalaluddin Bukhari. A contemporary of Rumi, he traveled around the Muslim world and settled in Sehwan where he was eventually laid to rest.

Following his death, Hindus within Sindh began to identify Lal Shahbaz Qalandar as an incarnation of their patron divine being, Jhul-e-lal.