7th Summit of the Organization of Islamic Countries (OIC) Hosted By Turkey: HumSub.TV

May 19, 2018 7th Summit of the Organization of Islamic Countries (OIC) Hosted By Turkey 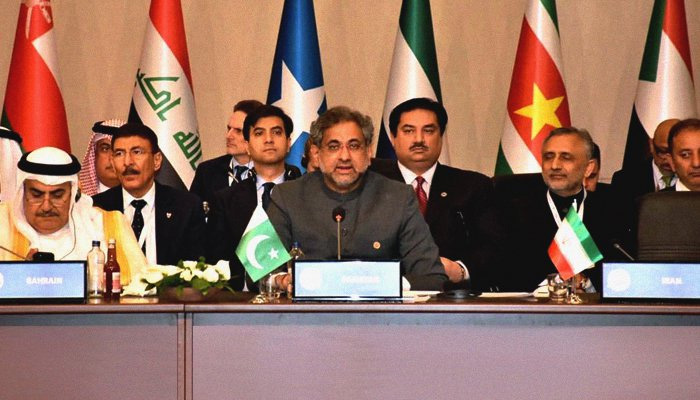 Addressing the 7th Extraordinary Summit of the OIC, Prime Minster urged the member states to unify their ranks and evolve an effective response strategy to conveying strong condemnation of the massacre and maiming of innocent Palestinians by Israeli forces.

Condemning the human rights violations by the occupying Israeli force, PM has called for an independent and transparent investigation of violence in Gaza.

PM Abbasi said; “On the diplomatic front, we must continue to demand the UN Security Council to fulfill its key responsibility for implementation of its existing resolutions,” adding that the OIC must demand accountability for defiance of its decisions.

“We must underscore that the Council’s credibility will be questioned if it does not deliver on its duty to ensure implementation of its resolutions. We must reject double standards in the enforcement of Council resolutions,” PM added.

The Prime Minister said if the UN Security Council was unable or unwilling to act, they should mobilize support in the UN General Assembly for rejection of revisionist decisions and ensuring accountability of violators of international law.

“We must also follow up on OIC decisions for economic and other appropriate actions to change the behavior of the occupying forces. We should also consider the possibility of seeking the ICJ’s advisory opinion on the illegality of recent actions,” he added.

“We need to reach out to other states and groupings to sustain support for the just cause of the Palestinians, put an end to continued killings and state terrorism and build an independent and contiguous State of Palestine, on the basis of internationally agreed parameters, the pre-1967 borders, and with Al-Quds Al-Sharif as its capital,” the prime minister concluded.

Turkish President Recep Tayyip Erdogan on Friday hosted Muslim leaders for an Istanbul summit to condemn Israel over the killing of Gaza protesters, seeking to bridge divisions with the Islamic world and issue a strong message.