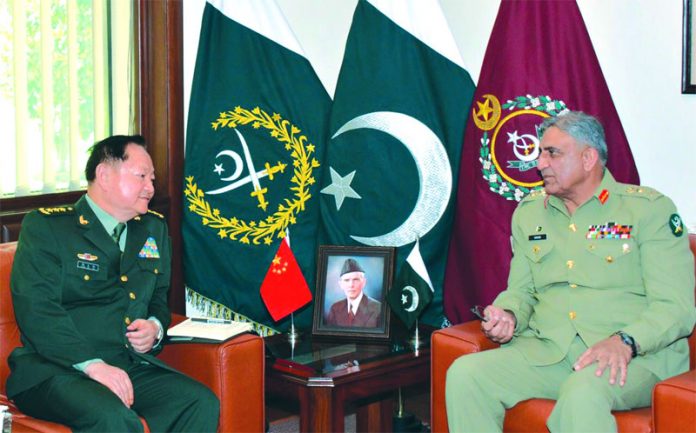 Later on, both leaders led their delegation during a formal discussion on the matters of mutual interests. Both leaders showed their satisfaction on the existing enviable cooperation between PAF and PLAAF, and reiterated their resolve to take this cooperation to further heights.

The meeting was followed by delegation level talks. During the meeting, matters of mutual interest, regional security and enhanced bilateral defence cooperation came under discussion.

COAS said that Pak-China relations are all weather and based on mutual trust and confidence.

He said that China Pakistan Economic Corridor (CPEC) is equally beneficial to both China and Pakistan and added “Efforts of Pakistan Army in safeguarding CPEC security are highly appreciated. We look forward to close cooperation with Pakistan to ensure the security of CPEC.”

Both sides also signed different MoUs for bilateral Defence cooperation. To pay homage to the martyrs of Pakistan Army, the visiting dignitary laid a floral wreath at Yadgar-e-Shuhada. A smartly turned out contingent of Pakistan Army presented guard of honour to Vice Chairman of Chinese CMC.