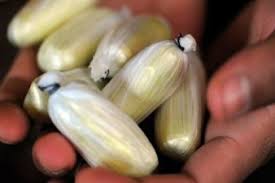 ANF spokesperson stated that the cache was seized during a raid and authorities are on the lookout for perpetrators.