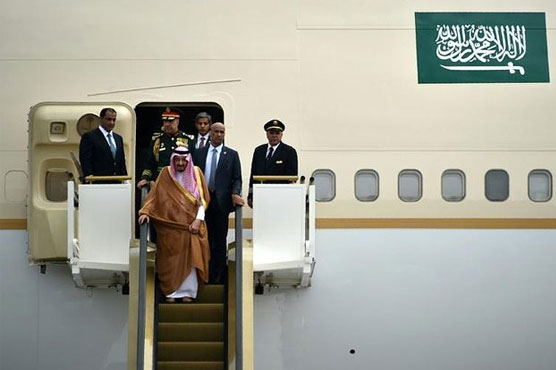 Cheering crowds welcomed King Salman Wednesday as he began the first visit by a Saudi monarch to Indonesia for almost 50 years, seeking stronger economic ties with the world’s most populous Muslim-majority country.

The king — who is accompanied by about 1,000 people, including princes and ministers — disembarked from his plane using an escalator as he arrived at an airport in Jakarta, the latest stop on an Asian tour.

The 81-year-old was greeted by President Joko Widodo and Jakarta governor Basuki Tjahaja Purnama, a Christian who is standing trial for blasphemy.

Crowds of flag-waving schoolchildren lined the route as a convoy of vehicles carrying the king and his entourage sped through pouring rain to a presidential palace in the nearby city of Bogor, where a marching band played the Indonesian national anthem.

Salman was due to hold talks with Widodo at the palace, where statues of naked figures had been covered up before the arrival of the head of the Muslim kingdom.

Almost 460 tons of equipment have been flown in for the visit, including Mercedes limousines, with most transported to the Hindu resort island of Bali, where Salman will go on holiday after visiting Jakarta.

The visit — the first by a Saudi Arabian king to Indonesia for 47 years — is one of the highlights of a rare Saudi royal tour of Asia which is seeking investment as the world’s biggest oil exporter tries to diversify its economy.

“This is an extremely historic visit for us,” Indonesian Cabinet Secretary Pramono Anung was quoted as saying in local media before the visit.

The king is due to give a speech to parliament on Thursday and visit Southeast Asia’s biggest mosque during his three-day visit to Jakarta.

Business deals could be announced, and a series of cooperation memoranda are also set to be signed on issues ranging from security, to health and education.

Indonesia will also seek approval to send more citizens to the annual hajj pilgrimage in western Saudi Arabia, which is home to Islam’s holiest sites.

The monarch and his entourage will reportedly stay in five luxury hotels in Bali for several days following the visit to Jakarta.

As part of the elaborate preparations for the visit, 150 chefs have been hired to cook food for the king and his party and a special VIP toilet has been built at the Jakarta mosque, according to local media.

Salman kicked off his three-week Asian tour in Malaysia earlier this week, and is also set to visit Japan, China and the Maldives.