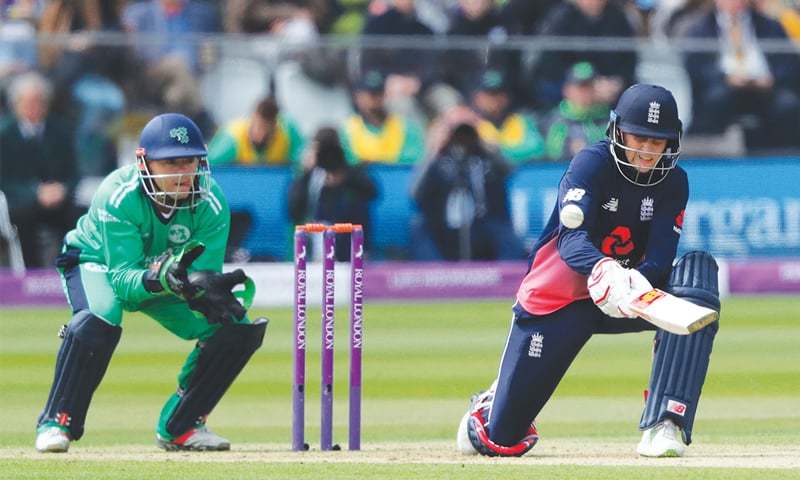 Bairstow, Root star as England seal Ireland series: Jonny Bairstow’s quickfire 72 not out and a good all-round effort from Joe Root set up England’s 85-run win over Ireland in the second one-day international at Lord’s on Sunday.

Victory saw England take the two-match series 2-0 after they had launched their build-up to next month’s Champions Trophy on home soil with a comfortable seven-wicket win at Bristol on Friday.

Ireland, in their first ODI at ‘the Home of Cricket’, fought hard with the ball in front of a 22,000-strong crowd.

But, as was the case on Friday, they suffered a batting collapse after a promising start and were dismissed for 243 chasing 329 to win.

Ireland captain William Porterfield did, however, make 82, the top score of the match, as his side, who could be granted Test status next month, restored some pride after being bowled out for just 126 in 33 overs at Bristol.

England risked squandering a strong position when their Dublin-born captain Eoin Morgan (76) and Root (73) fell in quick succession following a third-wicket stand of 140 to leave the hosts 213-4.

But Bairstow and Adil Rashid shared a sixth-wicket stand of 88 in just 46 balls that helped take England to 328-6.

Their Yorkshire county colleague Root was named man-of-the-match after also taking ODI best figures of 3-52 with his occasional off-spin.

Paul Stirling, like Morgan playing on his Middlesex home ground, launched Ireland’s reply with 48 at better than a run-a-ball.

But his dismissal was the start of a slump that saw three wickets lost for 19 runs.

Porterfield fielded first after winning the toss in overcast conditions that promised to assist his seamers.

His decision was all the more understandable given Ireland’s embarrassing batting display on Friday.

Tim Murtagh, another Middlesex player on show, took Ireland’s first wicket Sunday when he bowled Alex Hales (32) with a delivery that nipped back up the Lord’s slope.

However, on 39, he nearly played to off-spinner Stirling only for the ball to touch the stumps without dislodging a bail.

Root scored his runs in typically calm but brisk fashion on his way to a 57-ball fifty including five fours.

Morgan followed him to the landmark, off 49 balls with two fours and two sixes.

Both batsmen chipped to extra-cover off pacemen Peter Chase and Barry McCarthy respectively.

Test wicket-keeper Bairstow, playing as a specialist batsman, led a counter-attack, belting McCarthy high over long-on for one of three sixes in a 44-ball innings also featuring seven fours.

Bairstow’s charge helped England pile on 61 runs in the last four overs of their innings.

Ireland’s target of 329 was the same as the total they made in a thrilling 2011 World Cup win over England in Bangalore.

Stirling, at what was now a sun-drenched Lord’s, drove left-armer David Willey for three fours off successive balls in just the second over of Ireland’s reply.

But his 42-ball innings, ended when he edged Jake Ball to wicket-keeper Sam Billings.

Umpire Tim Robinson originally ruled not out but his decision was overturned on review.

Ireland’s 68-1 became 77-2 when Root, as happened at Bristol, struck in his first over by bowling former Middlesex and England batsman Ed Joyce.

Kevin O’Brien briefly revived memories of his match-winning hundred in India six years ago before he holed out for 18.

Porterfield, in sight of a hundred, tried to revive his side but was bowled attempting an extravagant lap-sweep off fast bowler Mark Wood, who ended the match by dismissing George Dockrell in the 47th over.