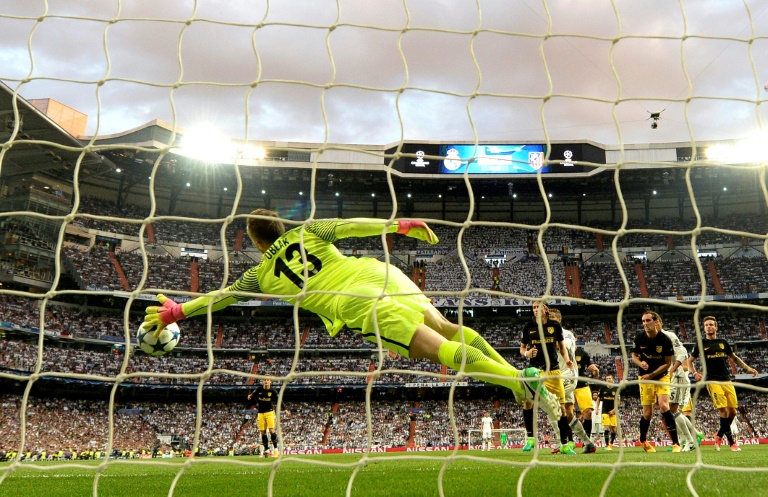 Atletico coach Diego Simeone went as far as to say that coming back from 3-0 down to holders Real Madrid in their derby at home would be “impossible” for other teams — but not his.

“I’ve told the players it is very difficult, that we are facing the best team in the world, who score goals in every game, but that it is possible,” the Argentine said after Atletico guaranteed a top-four finish in La Liga with a 1-0 win over Eibar on Saturday.

“I am convinced of it. If I wasn’t I wouldn’t say it. If we are united and understand that it is a semi-final at home, we have a chance.”

Real Madrid’s Cristiano Ronaldo scored a hat-trick in their UEFA Champions League semi-final 1st leg 3-0 win over Atletico Madrid, at the Santiago Bernabeu stadium in Madrid, on May 2, 2017

Cristiano Ronaldo, who was rested at the weekend, and his Real team-mates can expect a fiery reception at the Vicente Calderon on what promises to be an emotional occasion.

Wednesday’s clash will be the final European game at the Vicente Calderon because Atletico move to the new 67,000-capacity Wanda Metropolitano next season.

Atletico’s fans gave the team full-throated support at the weekend, staying on after the final whistle against Eibar, and the players responded by returning for a lap of honour.

Captain Gabi said they wanted to repay the fans: “Once again they haven’t left us behind.

“This group of players lacks a big comeback and we hope it is on Wednesday.”

Juventus’ Gonzalo Higuain celebrates after scoring a goal during their UEFA Champions League semi-final 1st leg match against Monaco, at the Stade Louis II stadium in Monaco, on May 3, 2017

Real have beaten Atletico twice in three years in the Champions League final and a Ronaldo hat-trick — his second treble in as many matches in the competition — brushed aside Simeone’s men in the first leg.

It would take a staggering capitulation for Real to fail to reach the final in Cardiff on June 3 as they chase a league and European double.

Coach Zinedine Zidane made nine changes to his side but they still thrashed already relegated Granada 4-0 at the weekend with James Rodriguez and Alvaro Morata scoring doubles.

The Frenchman warned his side they would need to produce the “perfect game” against Atletico but believes Real are in prime condition at a crucial juncture, having rested most of his starting XI.

Like Real, Italian champions Juventus — on the verge of retaining their Serie A title — are strong favourites to dispatch Monaco and they hold a commanding 2-0 lead from the first leg in France.

It is unthinkable that a side that shut out Lionel Messi and Barcelona over two legs in the quarter-finals will concede three times on Tuesday, especially with the game in Turin.

But Monaco are the leading scorers in Europe’s top leagues and in the 18-year-old striker Kylian Mbappe have the most wanted player in world football.

Monaco coach Leonardo Jardim is not one to make sweeping statements, but he refuses to believe that the tie is over and an early goal for his young side would put the home fans on edge.

“It is difficult but we need to keep believing. The best thing is to believe it is possible, even if we only have a five percent chance,” the Portuguese said.