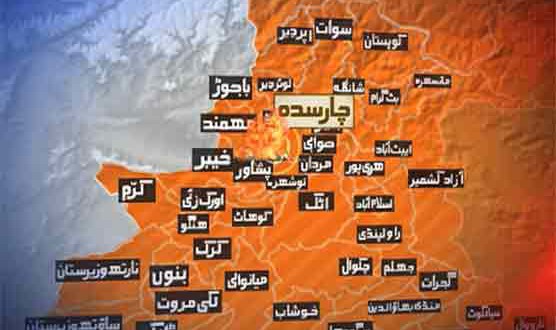 Three blasts and sporadic rounds of firing were reported at the gate of Tehsil Tangi court in Charsadda on Tuesday, killing at least seven people, including two police officers and a lawyer, and critically injuring 21 others.

Charsadda Divisional Police Officer Sohail Khalid confirmed that three suicide bombers tried to enter the district court premises after lobbing a hand grenade at the gate, but security forces shot two of them dead, while one suicide bomber detonated his device.

Eyewitnesses reported that some lawyers scaled walls to save their lives. The injured have been shifted to Tehsil Tangi Hospital.

According to Khyber Pakhtunkhwa Minister for Health and Information Shaukat Ali Yousafzai, the attackers are being suspected to have come from Mohmand Agency.

Police and security personnel have cordoned off the area and are monitoring the scene aerially over the suspected presence of more attackers.

Jamaat-ul-Ahraar has claimed the responsibility of the attack. The militant outfit previously professed to have carried out blasts in Lahore last week.

Punjab Chief Minister Shahbaz Sharif condemned the attack and said that terrorists are a common enemy of the entire humanity and have no religion. He emphasised on strict joint operations to efface them from the country.

Aftab Ahmed Sherpao denounced the attack and identified lack of proper strategy as the major reason behind the ease with which Charsadda had become a prominent victim of terrorism.

Police personnel were lauded for their prompt action against the attackers that prevented them from entering the sessions court.