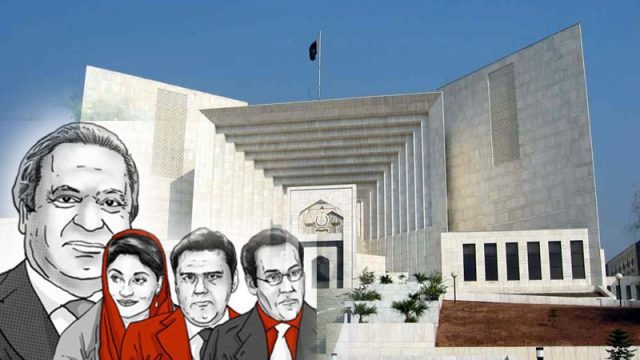 A five-member larger bench of the Supreme Court of Pakistan (SCP) headed by Justice Asif Saeed Khosa resumed the hearing of Panamagate scandal on Tuesday and said that the hearing of the case would probably get completed on Thursday.

Chairmen of National Accountability Bureau (NAB) and Federal Board of Revenue (FBR), Qamar Zaman Chaudhary and Dr Mohammad Irshad, respectively, appeared in the apex court as per the calling of last hearing.

During the case proceeding, Justice Azmat Saeed questioned FBR chairman about the Ministry of Foreign Affairs contacting concerned authorities regarding the Panamagate scandal and as to when were notices served to the owners of offshore companies.

During the proceedings on Tuesday, Justice Asif Saeed Khosa asked FBR about its role in offshore companies.

The FBR chairman replied that he had sent notices on September 2, 2016 to 343 people of which 39 were not Pakistanis, 52 refused ownership, 12 have passed away and 92 have agreed to own the companies.

“It took the FBR six months to cover a distance of 200 yards,” Justice Azmat Saeed jibed. “Who responded when notices were issued to Sharif family?” he further asked.

In reply, FBR chairman told that Prime Minister (PM) Nawaz Sharif’s children Maryam, Hassan and Hussain had responded to the notices wherein Maryam Nawaz clearly stated that she does not own any offshore company.

“It has been a year and NAB did not initiate any investigation,” remarked Justice Ijaz Afzal.

Justice Asif Saeed Khosa directed the Attorney General to finish his arguments by 11 a.m. tomorrow. It is pertinent to mention here that the counsels of Pakistan Tehreek-e-Insaaf (PTI) and Jamaat-e-Islami have completed their arguments in the case.

Meanwhile, PM and his children have submitted another petition in the SCP against additional documents submitted by PTI.