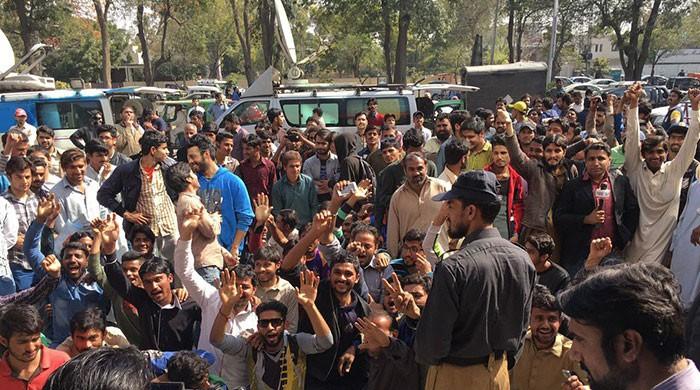 Scenes of anger and clashes were a common sight on Wednesday as cricket lovers swarmed outside branches of the Bank of Punjab to buy their tickets to Pakistan Super League (PSL) second edition final.

People formed long queues as early as 7.00 a.m. outside the bank’s branches in Lahore but refused to exhibit patience and demonstrated fights to get their hands on the limited cache of tickets available.

Angered enthusiasts could not bear with the policy of selling only a thousand tickets for Rs500 and subsequent ticket shortage, and chanted slogans against bank officials, police and Pakistan Cricket Board administration.

Clashes were reported near Liberty market after which police and Rangers have taken control of ticket-sale points.

On the other hand, online q-tickets for all enclosures of the Gaddafi Stadium were sold out within few hours, leaving cricket fans with no choice but stand in long lines and buy expensive tickets from identified sale spots.