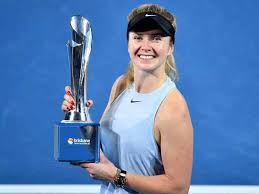 Elina Svitolina Stands Favorite For French Open: Simona Halep, 26, coming off an emotional semifinal victory over Maria Sharapova, struggled with an apparent injury in the final for the second successive year as she called the trainer on while trailing 2-3 in the second set. She also left the court for treatment on the suspected back problem during a medical timeout. This gave an edge to Elina Svitolina and World No. 4 Svitolina produced a devastating performance to dispatch rival Halep 6-0, 6-4 in a little over an hour on Campo Centrale at the Foro Italico.

The French Open at Roland Garros starts in just over a week, and Svitolina added: “Roland Garros is still a week away, but this gives me confidence.

“I can´t make any predictions as it´s very tricky in Paris, but I´m sure I will enjoy the next tournament.”

The world number one saved match point before bowing out after 67 minutes. “Congrats to Elina, she played amazing,” Halep said.

“It´s like this court is now her home. But I didn´t do so badly, reaching the final again. I hope to be back next year. “Maybe third time is lucky for me.”

Thanks to reaching the final in Rome Halep will take the top seeding for Roland Garros.

Despite a gutsy resistance from Halep, who made 21 enforced errors overall, Ukrainian Svitolina held firm to claim her third WTA title of the season ahead of the year’s second grand slam.

Rafael Nadal Is Back

Rafael Nadal won the Rome Masters for the eighth time on Sunday when he defeated defending champion Alexander Zverev 6-1, 1-6, 6-3 after a stunning comeback.

German second seed Zverev was 3-1 up in the decider before two rain stoppages halted his momentum.

When they returned after a second lengthy stoppage, top seed Nadal raced away with the last five games to secure a 32nd Masters title and ensure a return to the world number one spot.