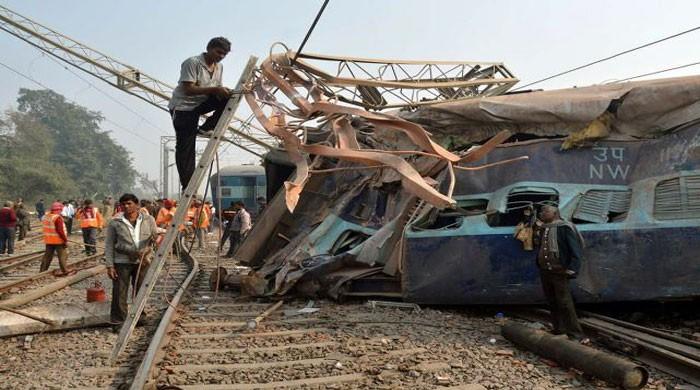 NEW DELHI: A train crash that killed 148 people may have been caused deliberately as part of a “conspiracy” hatched in Pakistan, India´s prime minister said Friday, as he campaigned for a key state election.

Narendra Modi said police had found evidence of sabotage in the disaster last November, when a crowded passenger train derailed in northern Uttar Pradesh (UP) state, linking it to neighbouring Pakistan.

Police have not corroborated that claim, made at a rally ahead of the latest stage of voting for a new government in UP — India´s most populous state and a hotly contested political prize.

“A rail accident happened in Kanpur and some people were arrested after that,” Modi said at an election rally in Uttar Pradesh´s Gonda district.

“The police found that it was a conspiracy hatched across the border,” he added, in an apparent reference to rival Pakistan.

“If people who will help the conspirators are elected from here, will Gonda be safe, will the nation be safe?”

Indian politicians have a long history of using rivalry with Pakistan to stoke nationalist sentiments ahead of elections.

The prime minister´s Bharatiya Janata Party (BJP) is facing a tough challenge in UP from the ruling Samajwadi Party in an election many see as a test of his popularity halfway through his first term.

The state, with a voting population equal to that of Brazil is key to Modi´s own political future as well as his party´s as India inches towards the next general election in 2019.

India and Pakistan have fought three wars since they separated after gaining independence from the British in 1947.

The nuclear-armed neighbours have been engaged in territorial disputes over Kashmir, with India accusing Pakistan of funding and supporting militant groups that fight its rule in the disputed Himalayan region as well as several deadly attacks on Indian cities.

Three suspects arrested over a failed bid to blow up a rail track in Bihar state in December confessed to working for an agent who had also ordered them to target the train in Kanpur.

Police later said they found no evidence to back the suspects´ claims.