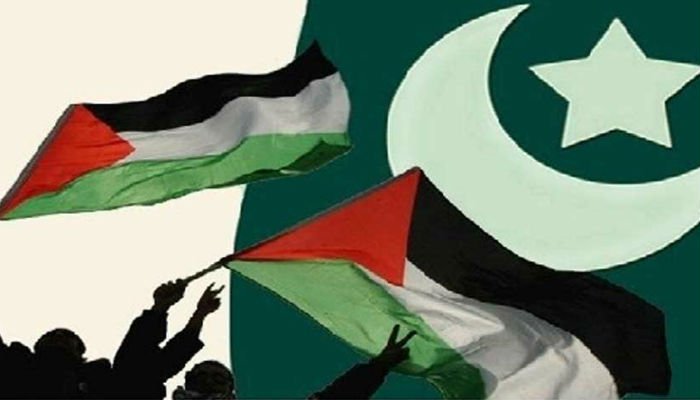 On the day protest rallies and demonstration were observed. Human rights minister of Punjab said that Israel had broken all the record of brutality on the innocent people of Palestine in which more than 100 people embraced martyrdom in Israeli fire.

He said that the government and the people of Pakistan would continue supporting their Palestinian brethren and presenting their case at every forum.

Condemning the Israeli brutalities against the innocent and unarmed Palestinians, party leaders have called upon the Muslim countries to sever diplomatic ties with America which has set up its Embassy in Jerusalem violating the territorial right of the Palestinians.

Addressing a large crowd protesting against Israel’s brutalities on the Palestinians outside the Lahore Press Club, the Jamat e Islami Ameer, Senator Sirajul Haq said that the Muslim Ummah must come up with a clear road map for Palestine’s liberation as mere verbal condemnation of the Zionist terrorism was not enough. He said the ongoing Palestinian situation is a test of the Muslim Ummah which needs to pursue a clear and common policy on the Palestine situation.

The JI chief said that the forces infidel had weakened the Muslims by involving them in petty internal differences and the Muslim world would have to foil the enemy agenda by sinking its minor differences and forging unity in its ranks.

It was urged in the gathering that that the so called biggest champion of human rights, the US, had thrown a challenge to the Muslim world by shifting its embassy in Jerusalem and had virtually attempted to throw the entire into a war.

The situation was a big challenge for the OIC.  Prime Minister Shahid Khaqan Abbasi in the OIC meeting called by Turkey has urged the Muslim countries to expel the US envoys in their lands and call back their ambassador from the US.

Speakers on the occasion stressed the Muslim states to pull out of the United Nations and establish their own Muslims United Nations as the UNO had failed to protect the rights of the Muslims and implement its resolution on Palestine and Kashmir.