Serena Not To Compete In Madrid Open: HumSub.TV 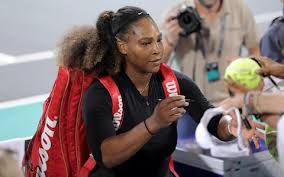 Serena Not To Compete In Madrid Open

Serena Not To Compete In Madrid Open: Tennis former world No. 1 Serena Williams has withdrawn from the Madrid Open as she continues to regain full fitness ahead of the French Open later this month, the tournament’s organizers said yesterday. Serena stated that she needed more time to train to be fit for the rest of the European clay-court season.

The 23-time Grand Slam champion, who won the Madrid Open in 2012 and 2013, returned to the WTA Tour in March after giving birth to her first child last September.

She told The New York Times last week that she would “definitely” play the tournament in Rome, which begins May 14, and the French Open, which would be her first Grand Slam event since beginning her comeback.

She missed the first Grand Slam of the year at the Australian Open in January and could also be ruled out of the May 27th to June 10th French Open.

A statement on the tournament’s official website read: “Serena Williams will not contest the Mutua Madrid Open 2018, (due to) needing a greater load of training to return to competition.

“The American has tried until the last minute to be ready to reappear on the clay of the Caja Magica.” “She is one of the great champions of our sport, she has always offered a show to the tournament and we hope to see her again at the Caja Magica in the future.”

Rio Ferdinand Did Not Get License From British Boxing Authorities

Former Manchester United and England defender Rio Ferdinand said that he was “disappointed” after being refused a professional license by British boxing authorities.

The 39-year-old, coached by former World Boxing Council super-middleweight champion Richie Woodhall, had been backed by betting company Betfair as part of the “Defender to Contender” challenge.

“Having been training four to five times a week since announcing the aim of achieving a professional boxing license and stepping into the ring, it is with a heavy heart that I am hanging up my gloves,” he wrote on Facebook.